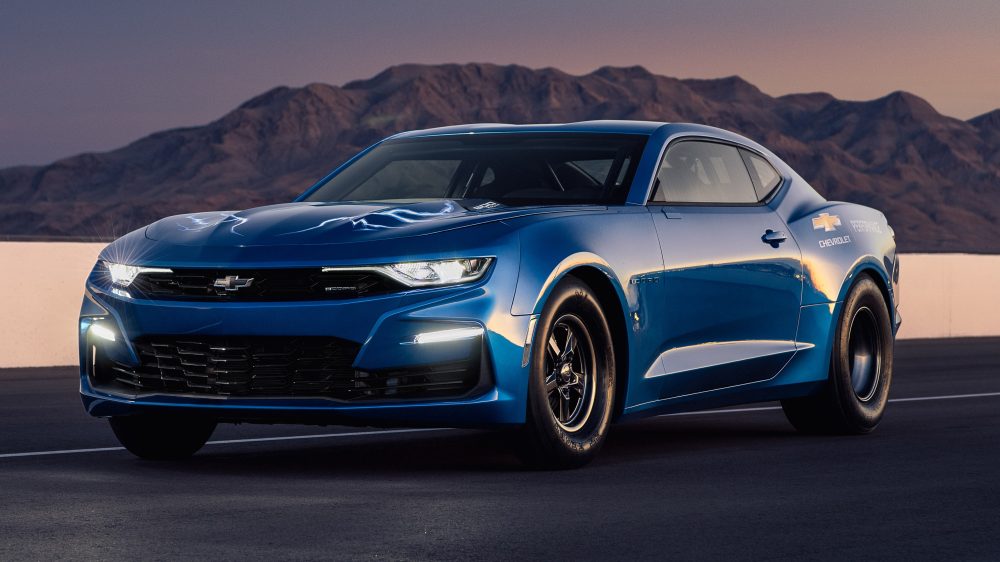 700 hp, 600 lb-ft and zero emissions from an all-electric drivetrain in a COPO Camaro

Chevrolet startled the enthusiast car world the night before SEMA opened with an all-electric Camaro concept meant for drag racing.

You’d expect a beastly powerful COPO Camaro to debut at the enormous SEMA aftermarket parts show, especially considering that this is the model’s 50th anniversary. And one did. On Monday night, at a new preview event called SEMA Red Carpet, Chevy VP of performance cars, motorsports and everything else that’s fun Jim Campbell introduced a more-or-less-to-be-expected 50th anniversary COPO Camaro with a 427 LSX V8 mated to a Turbo 400 transmission.

But it was soon apparent that there was something else coming up.

“What could be next,” teased Campbell, rhetorically. “We’re always looking to innovate.”

He spoke of “performance and efficiency on the street and track.”

Also, certainly coincidentally, only a few days before, GM CEO Mary Barra had called for a national zero-emission vehicle program. So you could say the atmosphere the night before SEMA was electric. And after the 427-powered COPO Camaro rumbled off the Red Carpet ramp to a smattering of applause, another COPO Camaro rolled up –- only it did it completely silently.

The eCOPO Camaro lights ’em up at the drag strip.

The eCOPO is powered by two big, fat electric motors under the hood, longitudinally aligned, bolted straight onto the bellhousing of a conventional Turbo Hydramatic 400 automatic transmission, routing torque to the rear wheels. The two BorgWarner HVH 250-150 motors together make 700 hp and 600 lb-ft, the latter achieved just above 0 rpm. Two battery packs sit where the rear seats used to be, and two more are in the trunk. Total power is 800 volts. Official estimates are for quarter-mile times in the high nines with trap speeds in the high 130s to low 140s.

“The eCOPO Concept is all about where we go in the future with electrification in the high-performance space,” said Russ O’Blenes, director, Performance Variants, Parts and Motorsports at General Motors. “The original COPO Camaro program was all about pushing the envelope, and this concept is an exploration with the very same spirit.”

Officially the car is just a concept, with no plans for production and no pricing estimates. But it will be raced in the Pacific Northwest by the winning Hancock and Lane drag racing team based in North Bend, Washington. The team will be at the Lucas Oil Drag Racing Series Nov. 1-4 at The Strip in Las Vegas and at the Auto Club Finals Nov. 8-11 in Pomona, for starters. So you can go see the car in action and see if it’ll really do nines.

It should, considering that it was built by Patrick McCue, whose all-electric Pontiac Trans-Am has already done the quarter mile in 8.3 seconds at 166 mph. McCue runs the Bothell North Shore Automotive Tech Program at Bothell High School in Bothell, Washington, northeast of Seattle. The crew first converted a BMW Z3 to electric power in 2012, then there was the “Shock and Awe” all-electric Trans-Am and now this Camaro. I spoke with team members Stephen Johnsen, Charlie Tsai and Ron Easley at SEMA and was impressed with the depth of knowledge. 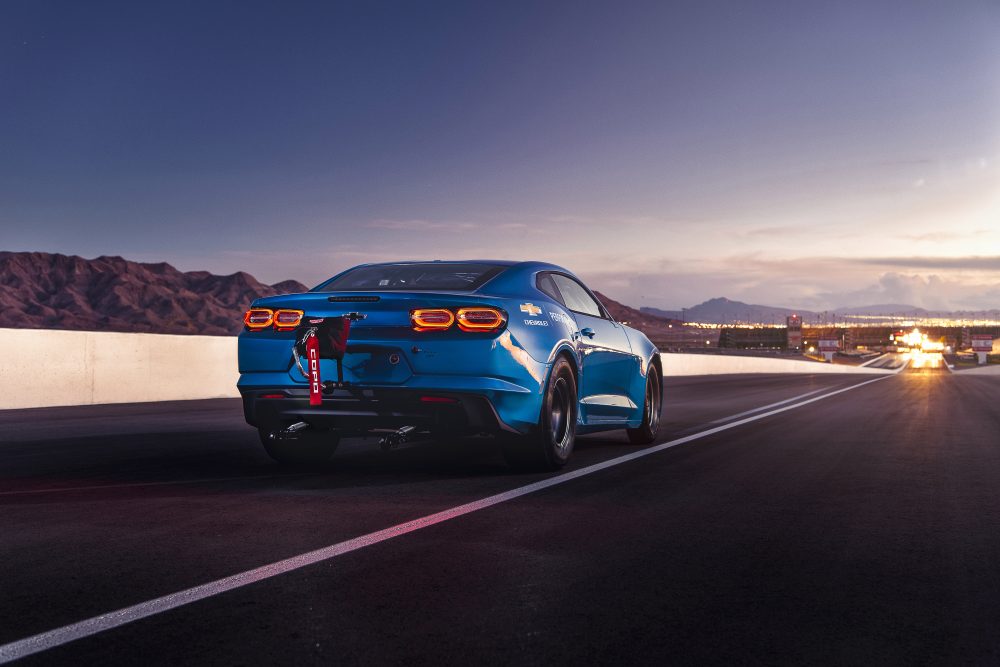 “This project exemplifies Chevrolet and General Motors’ commitment to engaging young minds in STEM education,” said O’Blenes. “It also represents our goal of a world with zero emissions, with the next generation of engineers and scientists who will help us get there.”

It’s more than just a concept, too, or it could be more, as GM said in a release:

“The eCOPO Camaro’s electric motor has the same bell house mounting pattern and crankshaft flange as the popular LS-family engines in Chevrolet’s crate engine portfolio. That allows it to bolt up to just about any General Motors transmission. In fact, the transmission, driveshaft and other drivetrain components remain in the same locations as in a gasoline-powered COPO Camaro race car, meaning the electric motor simply bolts into the engine compartment in place of the gas engine.

“The possibilities are intriguing and suggest a whole new world for racers,” said O’Blenes. “Chevrolet pioneered the concept of the high-performance crate engine right around the time the original COPO Camaro models were created, and the eCOPO project points to a future that could include electric crate motors for racing, or even your street rod. We’re not there yet, but it’s something we’re exploring.”

“In the meantime, Chevrolet and Hancock and Lane Racing will continue to develop the eCOPO Camaro and test it on the drag strip, seeking quicker elapsed times with all-new technology.”

Imagine drag racing that is quicker, but silent. Could be. And there could someday be an electric car section at SEMA -– in our lifetimes. But for this year’s show, there is just the eCOPO, and that was quite something.

Tesla is now selling a cheaper Model 3 with a 260-mile battery starting at $45,000
PREVIOUS POST